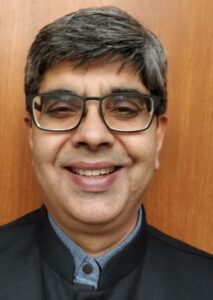 Born in 1965 in the mountains of Himachal Pradesh in India, Rajeev’s schooling took place in Jammu, Sanawar in Himachal and Delhi. Forfeiting a conventional career and responding to an inner urge, he lived and worked with tribal communities in Nadurbar in Maharashtra. Two years later, he returned to Himachal where he established and supported a host of initiatives and NGOs in the fields of environmental, social and economic development, while also advising on a number of government and bilateral development programmes. He moved in 2004 with his family to Lesotho in Africa, where he advised the establishment of its first ever Local Government system. Followed by a short stint in Ghana, he moved to Mumbai in 2011, helping establish developmental projects throughout India for the social inclusion wing of IL&FS. In 2016, he went back to working for GIZ, an international development agency. His thirty years of rural development work has seen Rajeev travel across 21 countries and most corners of India, experiencing the varied contexts of these societies. He currently lives in Delhi, dividing time between his passion for his work and for bird watching, photography, travelling and reading.

Shakti Foundation is a registered not-for-profit entity started by a group of like-minded socially conscious citizens in 2010 to provide shakti (energy) to people and children to better their quality of lives sustainably.